I read about this game early in the year and instantly jotted down its release date. It was released the end of April so thus I suspected it would be a perfect birthday present to myself.

Then when I saw the collector's edition it was a must have. It included the game, soundtrack, a collectible figure of main character (Six), a poster and stickers. It was the perfect addition to my PS4 game options. It is explained as a dark whimsical tale based on your childhood fears. The game has a definite surreal feel to it as you aren't sure whether it is set in a dream state or whether it is actually happening, which is perfect for the nightmare effect. We have all woken from a nightmare at some point unsure what is real and what isn't.
So I am not going to discuss the finer points of the plot as I always personally hate it when a game is ruined/plot exposed before I have a chance to discover it for myself. There is also lots of spoilers and theories on the internet already. The basics are that Six awakens at the bottom of The Maw and is looking for answers and a way up and out. 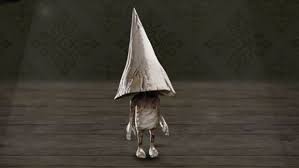 This is a Nom a reoccuring character/s throughout the game. Six is the same size as these creatures with everyone else towering over them both. We also never really see a face on either a Nom or Six and both find solace in the shadows hiding from the other creatures on board the ship(The Maw). One of the scenes I found the most disturbing is between a Nom and Six. The Nom are friendly, though skittish and one of the goals for Six is to hug them when she can. So while playing you will always be on the lookout for the next Nom sighting. 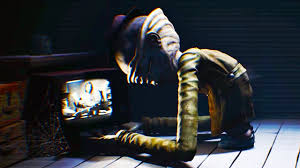 This is the Janitor one of the characters who Six is fleeing from. He has a heightened sense of smell, extremely long arms and is blind. Six has difficulty staying out of his reach as he has a sense of smell highly attuned to her scent and those long arms. So lots of running, jumping, ducking and hiding is involved in scenes with the Janitor. 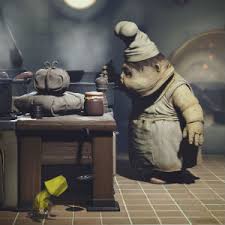 Another bad guy is the Chef and in truth he is a twin so there is two of them to avoid at times. These guys seem to be cooking constantly and Six really doesn't want to be part of the recipe. The Chefs have short stubby arms so climbing to high places is often helpful. They also seem to have difficulty seeing Six when she is under a table but remember there is two of them, so it is always important to know each ones location. 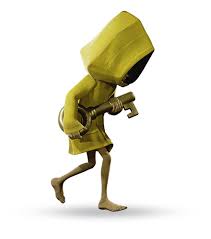 When I first got the game I played for a few 2 hour stints, but decided I needed a day at some point to persevere and get through scenes that needed some problem solving done, so thus it has taken three months. Being a platformer style specific sequences needed to be accomplished and I find it is best to give this my full concentration. The fact that my daughter is in day camp this week and that it is really HOT outside gave me the perfect setting to accomplish this.
Now that I know the whole story at a future date I will take the time to play through the game again and achieve all the trophies. Often the first time through a game a few trophies are always missed and I have a tendency to be a completionist. Yes I am one of those who like to reach 100% in a game.
I am glad I bought this game and certain scenes will stay in my mind for quite a while. Memorable scenes are very important to any game and very important to me, it means the storyline and graphics work well together. Presently Six hangs out on a shelf in the living room and brings these scenes to mind when I catch her out of the corner of my eye.