My fascination with Amigurumi has shown itself again. This week I have been working my way through the Creepy Cute Cochet - Zombies, Ninjas, Robots and More! by Christen Haden. Of course I am not following the patterns exactly. I seldomly do :0). 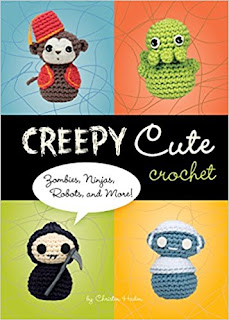 So far I have completed a bride and groom by taking aspects from the patterns for Skeleton Bride and Groom and the Day of the Dead Gal & Fellow. I used the headdress from Day of the Dead Gal as I didn't have any white tulle on hand. Then I decided they both needed some adornment around/on their necks. Pretty cute results. 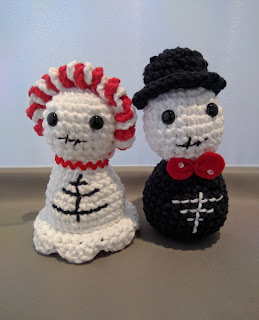 Then I moved onto the GrimReaper and a Trojan which are both still missing their weapons. Those will be completed soon as I have decided to create a scythe and a sword using Sculpey. The GrimReaper seems like a teen to me in this incarnation so I see a goth girlfriend in the future for him. 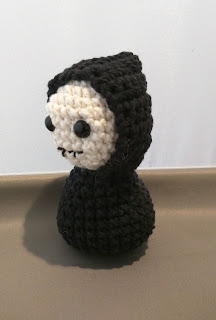 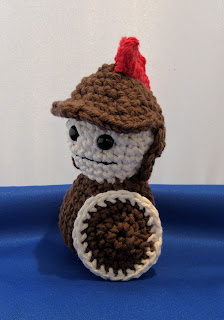 The next pattern I decided was a must make was Chuthlu which meant I had to get some green yarn. Which then made me start thinking what else could be created using it as a main colour. It looks like there may be more creatures to come. Perhaps an alien, Caterpillar(Alice in Wonderland has so much potential), Medusa. 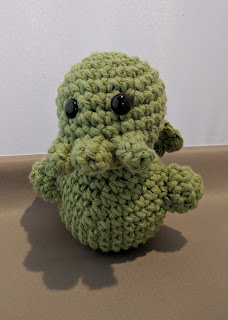 Presently I am working on the Monkey which is wearing a fez of course. The book includes 20 different patterns with many of them using the same body and or head pattern.Creepy Cute Crochet is good inspiration and it is quite easy to use ideas from multiple patterns to put your own spin on your creations. So once again yarn is residing by my chair waiting to be made into creatures when I am binge watching my latest fascination on the screen. Lately it has been a couple of episodes of Community most nights which I am working my way through with my daughter. Or later in the evening Banshee with my husband.