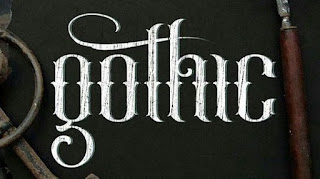 In the late 80’s and the 90’s I was a Goth girl, in many ways I still am. In high school I was often referred to as the girl who wore big boots, short skirts and long coats. My husband likes to sing "Short Skirt Long Jacket" by Cake to me whenever we come across a picture from that time. The long coats and short skirts were most often my own creations or something that I had modified from a thrift shop. My attire did not change much season to season even though I grew up in a climate which includes 4 definite seasons. And I assure you fishnets are not the best thing to wear when it it -10 C and colder, though I would do up my coat then. When I moved to Toronto to go to Fashion school I stopped wearing any colour other than black and to this day I still have a hard time wearing bright colours. Colour enters my wardrobe through accessories mainly, one of my favourites being funky striped socks worn with attention getting footwear, laceups, mainly black, occasionally shades of red or purple. For footwear my favourite has been Fluevogs for about 25 years now. Looking in my closet you can see my obsession with Fluevog footwear, some of them have been resoled, restitched, and some hardly worn but they are all beautiful. Throughout my teenage years until my early 20’s every year my Dad gave me a birthday card that read I.O.U one pair of boots. My favourite boots presently are the Zachary which are no longer being made :( . My pair is well worn, have been resoled and restitched and need some TLC again. I have my fingers crossed that they will release them again as lace up boots with no zippers are practically impossible to find. If I am not wearing these with a skirt or bloomers my other go to's are my burgundy derby swirls(Fluevogs of course) with pants.

I have always read voraciously and during my heavy Goth phase I read a lot of theology and philosophy when I wasn’t focused on fashion and music. I still have an extensive collection of books on Voodoo, History of Witchcraft and the odd Neitzche mixed in with my other reading material. I listened to mainly British music during this time as they had a stronger goth scene(Bauhaus, Sisters of Mercy, Fields of Nephilim, The Mission etc) otherwise it was punk or industrial music. Most of the other kids were into Hair Metal or ProgRock at my high school and I didn’t meet many other people who had similar listening trends until I left home. Being Canadian I tried anything put out on Network records the home of Skinny Puppy and Sarah McLachlan, opposite ends of spectrum for music. Of course I was a Skinny Puppy fan out of those two, though I have always respected Sarah as a strong female Canadian musician. I had many friends while living in Toronto(college years) whose goal in life was to look exactly like Robert Smith of The Cure, Peter Murphy of Bauhaus or truly believed Sid Vicious was a good roll model. Some even followed the fashion of the Rude Boys of Ska music or did the total Rockabilly look. Normally these weren’t boundaries to be blended but I have never been inclusive in my fandoms or subcultures and I really hope some of the evenings we spent at the pub together at my insistence resulted in some lasting friendships that wouldn’t of happened otherwise. At this stage in my life I was pretty fearless in starting conversation with anyone who happened to catch my attention.  Something I am sad to say isn’t as prominent now, it seemed so much easier when I was in my 20’s to just strike up a conversation with a stranger.

Goth Phase also equaled Club Scene participant. The only night I didn’t go out was Saturday as that was when all the frat boy/jock types were out. Sundays and Mondays were the best as then I went to clubs/alternative spaces with staff from other places. Otherwise Thursday was a great night for Goth music or seeing a band at Lee’s Palace. Because of my interest in fashion and especially alternative fashion I also met a variety of people from the fetish scene. I honestly can’t believe I use to make and wear creations made from PVC fabric or latex, neither fabric is meant for comfort. Those outfits were made to be seen in, pose in, definitely not for dancing. But every time I went to the Tazmanian Ballroom it was like going to a members only fashion show. One of the aspects of the evening was showing off your outfit, this was also the era of Jean Paul Gaultier and the iconic cone bra he created for Madonna, the resurgence of lingerie as outer wear and the start of body modification entering the mainstream. Going to a Con nowadays has a similar vibe at times when I see people reconnecting, showing off their outfits or their latest obsession. Fashion and dressing to please and express yourself is very important to me. I am one of those people who will paint a fence in a velvet skirt if that is what I chose to wear today though comfort has become more important to me then it was. I still prefer boots over shoes, my skirts are longer nowadays and I still own a variety of long flowing coats.

And just for fun here is a link for Short Skirt Long Coat by Cake - not very Goth but a catchy song :)
www.youtube.com/watch?v=TiLt1XdXGNo