Simon Pegg and Sisters of Mercy 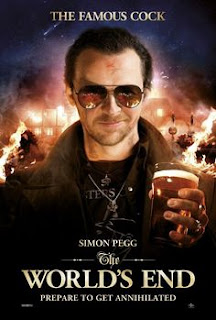 When "The World's End" came out I heard rumours that it had a strong Goth soundtrack and they weren't lying. It was exciting to discover that Simon Pegg and his cohorts Nick Frost and Edgar Wright shared my fondness for Goth music. When Simon talks about his favourite Goth bands and creates his playlist it overlaps with mine continously. Thus it has become one of my favourite movies to watch just because. No I can't quote lines from the movie because I have to admit I kinda watch it like one long music video. Being a fan of Sisters of Mercy I can see similarities in scenes to some of their videos and also Fields of Nephilim videos. In general it just captures the total vibe. How can I not love a movie which has a main character, Gary King, who loved Sisters of Mercy so much he has the bands logo tattooed on his chest and he still loves them. He also still wears a band tshirt and  the quintessential coat of his youth. Gary remembers the 80's as the best time of his life and wishes he could relive them and this is the basic plotline of the movie along with some aliens, violence and humour thrown in the mix.

This movie is the third installment of "The Three Flavours Cornetto" or as some call it the "Blood and Ice Cream Trilogy". The first was "Shaun of The Dead" which is a comedy disguised as a zombie flick or a Rom/Zom/Com. The Cornetto flavour or colour of this film is Strawberry which signifies all the blood and gore. The second is "Hot Fuzz" which is a comedy disguised as a cop buddy movie with a mysterious cult included. Here the Cornetto colour is the Original flavour, colour blue aka Men in Blue. "The World's End" is the last in the trilogy and it is a mixture of comedy, science fiction and little green men. In this one the flavour of Cornetto is green mint chocolate chip and you have to watch for the reference.  I like all of them but I would reverse them for my order of preference.

These are just a couple of the fun posters you can find when searching Cornetto Triology :) 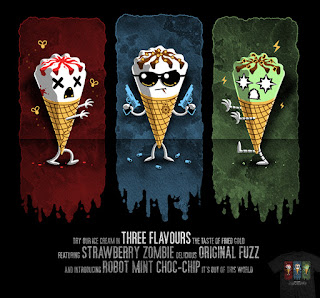 Because of my fondness for Simon Pegg he now makes my daughters list of favourite actors, who are mainly British. Her favourite Simon Pegg movie is probably "Absolutely Anything"(2017), which rates really high in her books as it  includes Monty Python allumni in the cast and is directed by Terry Jones. British humour, thus Monty Python is very popular in our household. The movies starring Simon Pegg we have watched together so far are:

Shaun of the Dead
Hot Fuzz
The World's End
Run, Fatboy, Run
Hector And The Search For Happiness
Absolutely Anything
Man Up
Kill Me Three Times

In "Cuban Fury" (starring Nick Frost) Simon Pegg has a cameo which we both caught because we had recently watched "Kill Me Three Times", it was the mustache which caught our eye. "Kill Me Three Times" was probably the first movie she watched that has done a nonconsecutive storyline and she still isn't sure whether she approves of the techniques. We also realized she has seen The Boxtrolls and Room On The Broom - voice actor. Simon Pegg has now become one of our go to actors for what we call our Film Studies Course, yes we discuss plot, genres etc. I am movie buff so I enjoy introducing her to actors/actresses that are not standard North American fare. If I can sneak in music also, even better, especially when it is a band like Sisters of Mercy :).