God Of War A New Obsession

God Of War was my birthday present to myself and has become a new form of procrastination and enjoyment. Definitely a bit of an obsession. I have actually been competing with my daughter in the morning for monologues on our latest fandoms. She has been talking about My Hero Academia on our walks to school and I have been talking about God Of War. Still not sure who can be more of a motor mouth on their topic of choice. Our conversations I am sure seem very disjointed to anyone who happens to overhear but there would be no doubt that we are both very passionate about the discussion :). 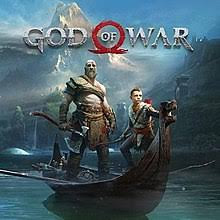 God of War is another game which is beautiful to look at. I am not really that far into the game and I am already impressed with the graphics. There is so much detail to every scene it is one of those games that I wish you could experience in slow motion. At points during fight scenes I just want to see what else is going on instead of concentrating on the fight. This is the main reason I become enthralled in games that have a plot and beautiful scenery, still haven't found a first person shooter that grips me.

The main characters, Kratos and his son Arteus are on a quest of scattering the ashes of their wife/mother on a distant mountaintop. Of course they have lots of turmoil, conflict and adventure en route. Kratos is not a very likable character and every time he calls his son "Boy" I cringe, though when he lost his son in the fog during hunting practice he calls "Atreus" so you know he can be caring. As the plot develops we learn more about their relationship and secrets are gradually revealed, throw in Norse mythology, other realms and we have a game that has caught my attention. I am sure I will loose many hours to this game as I explore/solve every side quest, look for and kill every raven,  and add new creatures to my bestiary.

So Happy Birthday to me, last year I got Little Nightmares, this year God Of War, here's hoping next April brings me a game release I will enjoy.

Email ThisBlogThis!Share to TwitterShare to FacebookShare to Pinterest
Labels: God Of War, videogames